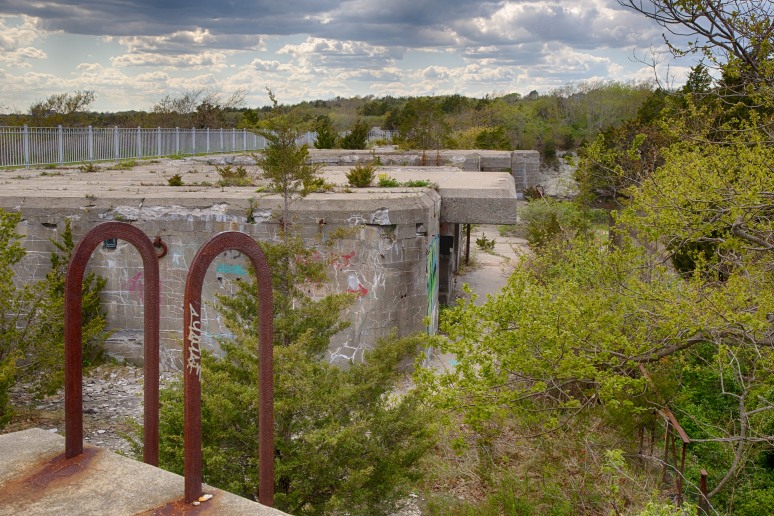 This is what remains of Battery Varnum at Fort Wetherill, in Jamestown, Rhode Island, at the mouth of Narragansett Bay. From 1898 to 1943 this held a pair of harbor defense guns, nestled behind a concrete, steel and dirt outer barrier that protected them from direct fire. These were big guns, the apex of technology for the day: rifled, 37′ (11 m) barrels that could throw a 12″ (305 mm) diameter, 1,070 lb (485 kg) shell 8.6 miles (13.8 km). And this was only one of seven batteries (sets of two or more guns managed together) although only one other had guns this size. There were other forts nearby, including Fort Adams, which also had a substantial number of guns, although none to match these.

The fort was a product of the c. 1890 “Endicott period” modernization of harbor defenses that flourished with the 1898 Spanish-American War, and continued at a lesser pace through to the First World War. At the time it was a state-of-the-art military facility, but that was to be short-lived.

Guns like this in fortifications were effectively obsolete well before WWII, replaced by airplanes as a coastal defense. By the end of that war the fort mounted only a small group of 90mm canon in exposed mounts, suitable for firing on torpedo boats trying to enter the bay, and its staff was mainly responsible for overseeing the minefields in the bay’s entrance that kept submarines out. After the war the fort was mothballed, and eventually passed into state ownership. Today it is all public land: part state park and part just recreational land.

The guns themselves apparently survived until 1943, when they were scrapped.  They could, perhaps, have ended up on a ship during the construction boom at the start of the Second World War, but 12-inch was an odd size.  Battleships by then mounted larger 16-inch guns, and most ships used smaller guns (5″ was a typical size); the 12-inch size was used on at least two ships (the Alaska class Cruisers), but I couldn’t find any others. And shore-battery guns were probably a different design from naval guns anyway.  What’s surprising is not that the guns were scrapped during a war, but that they hadn’t been in the two decades prior.

What remains of the old fort, aside from some buildings at the small harbor, are the concrete structures too solid to be removed, fitted with safety railings to keep tourists from walking off an edge, and with entrances optimistically covered with steel plates to keep the curious out of the interior (enough of the plates have been removed that the inside is well-tagged with graffiti and littered with broken glass). The surrounding woods have overgrown much of the area, and interesting structures lurk down well-worn paths. It’s a very interesting place to explore. I came across an observation post with only the roof and upper foot or so visible above ground, but with the ladder down into it still functional. The view had at one time been of the ocean, but now all that could be seen from the window were the trees immediately in front of it.

It’s also popular: even on an off-season weekend that threatened rain the place was crowded, with perhaps thirty people in separate small groups wandering around the state park portion. The section down by the harbor where I took this photo was less crowded. There were still several groups in the area, and a half-dozen cars in the parking lot (most appeared to belong to boaters and those fishing from the rocks and dock, rather than tourists).

But crowded or not, it was a lot of fun to explore, and I only covered most of it in the course of a couple of hours.  I’ll have to go back some time, with a good pair of boots (I was wearing sneakers for climbing on potentially damp concrete) and a stronger flashlight than the little pocket LED one I brought. And maybe a camera with a flash for some interior photography.

I like this photo for both the structure it displays and how it shows that nature will reclaim even the most enduring of remains once they’re no longer being maintained. There are literally trees growing out of solid concrete that extends tens of feet below them, having found a purchase in wind-blown dirt that’s filled depressions.  Over time those roots will reach down and slowly break open any imperfection in the concrete, allowing water in to rust away the steel reinforcing rods (I saw one place where several feet of concrete had fallen away, exposing the rods). And as you can see in the photo, some of this concrete isn’t as solid as one might hope. It was probably built in a hurry.  Deconstruction is a slow process, and thousands of years from now there will probably still be some identifiable remains from something this large. But in the end, nature wins.

I also like the photo for the looming clouds over the early-Spring vegetation. Down here by the ocean, Spring isn’t as far along as it is inland, and trees are just putting out their first leaves, still yellow-green. This is a slice of a very short-lived transitional portion of the season, and usually a rainy one, so opportunities to photograph it aren’t very common, at least for a weekend hobbyist like myself.

This image is an HDR, made as usual from a bracket of five exposures at 1 EV offsets centered on 1/125th-second, at f/11, ISO 400, with the lens at 47mm. A circular polarizing filter was used, and helped to bring out the clouds as well as the leaves (polarizing filters are good at removing glare from reflected light off leaves). And again I’ve managed an HDR that doesn’t look like one, although that’s partially due to a relatively modest range of light intensity in the scene. In the HDR software I used the Detailed preset, but made adjustments to lighten the photo and improve contrast, as well as for once adding some saturation (usually I have to remove it, but this image was slightly washed-out with the defaults). Back in Aperture I did the usual edge sharpening. I could perhaps have gained the same result with a neutral-density filter for the sky (or software emulating one), but the HDR process brought out detail in the trees that I think would have been lost that way.